The one time pad cipher is arguably one of the most simple ciphers. The cipher is completely unbreakable by means of logics. Computers can not crack it. The only known method to find the correct keys is through torture. As torture is one form of cryptanalysis (its called "rubber hose cryptanalysis") we could if we want say that this cipher is in fact breakable.

Notice that remote key exchange over an unsecure network is not possible. ONLY exchange cipherkeys directly with the person you wish to communicate with.

If you ever plan on using the OTP cipher, you really need to make sure that you completely understand it. It is simple to make mistakes! 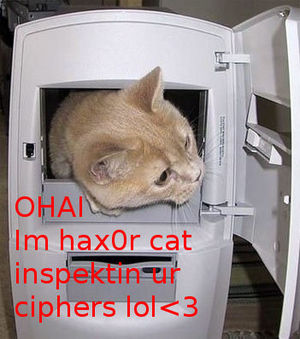 "In cryptography, the one-time pad (OTP) is a type of encryption, which has been proven to be impossible to crack if used correctly." - wikipedia so it must be true!

One time pad is likely the most simple form of cryptoalgoritm. A key is generated and shared between two peers that wish to communicate with each other. The key must be equally long as the message that is sent. The key must also be transmitted in person or via a sneakernet of completely trusted couriers. (If you send the key to your peer with another crypto, OTP will be just as secure as the crypto used to transmit the key. Do not rely on other ciphers, the chain is just as secure as its weakest link. Do not transmit the keys with any other means than sneakernet.)

Everything below is probably only interesting for computer nerds :-)

The following script (called otpgrb) can be used to generate keys.

will generate a 512 byte long random number and put it in the file my-key. Be sure to use a computer with an encrypted hard drive, or use a RAM file system, if you suspect that your computer could ever end up in the hands of others. If you are using OpenBSD you need to exchange /dev/random with /dev/srandom.

[edit] Encrypting with the OTP cipher

xor is a C program that xors the input from stdin with a given file, byte after byte, and presents the output to stdout. The syntax is: "./xor key". If you do not want strange stuff written to your screen, you could type something like "./xor key < cleartext > ciphertext".

After you have generated your key, you need to give it to the person whom which you wish to communicate with in the future. Put the key on an USB stick and deliver it to your friend.

To encrypt messages, you need to xor the plaintext with the OTP key:

Once a key has been used, it should NEVER again be used. Both you and your friend should throw it away. If you reuse the key, the cipher is extremely vulnerable. However, if you never reuse the keys, it is not possible to crack the cipher with any known methods ;) In fact, it has been mathematically proven to be impossible to crack. It achieves perfect secrecy.

To be extremely cautious, it is advised to either physically destroy the medium containing the key, or at the very least, shred the entire filesystem. The shred utility is known to be inadequate for destroying individual files.[1]

If the field agents memorize the coding scheme and keep numbered records of OTP-keys it is possible to perform the computations needed for perfectly secure communication by hand.

The cipher is very simple. Just generate a random sequence of [a-z][1-6]-symbols (32 symbols) and save them as your key. When you encrypt a message, just shift the clear text left equal to the position in the alphabet of the key (a = 0 shifts left, b = 1 shifts left, etc.). Do this symbol by symbol until you reach the end of the message. Decryption works exactly the same, but in reverse.

Generate randomness by collecting binary sequences from /dev/random (linux) or /dev/srandom (OpenBSD). Use the otpgrb script to do this. Then xor the random blocks that have been generated (possibly at different machines at different times) to generate a new binary random sequence. This sequence could then be fed to alphabetize (see below) to create an standard human readable form of the key. If the field agent writes this key down, it is possible to perform the rest of the calculations with only a brain, a paper and a pen.

[edit] Description of the code used

This table is very useful if you want to use the encryption scheme without a computer. TCMB field agents should have printouts of it in their cipherbooks, along with the numbered OTP-keys.

It is a simple tabula recta for the 32 symbol long alphabet we use. The number 32 was chosen because it is a nice exponent of 2 and because it is probably the last such exponent that is easily usable by humans. A 64 symbol long alphabet would have generated a 4 times larger table; 2 times larger in both horizontal and vertical length. On the other hand, 16 symbols would add complexity because there are obviously more letters in most human alphabets.

The convention is to replace the symbols 1-6 with whatever you think is more needed. Such as space, lol :)

Decryption: Find the key in the left-most column. Go straight to the right from this point to the crypto text-symbol. When you find it, go straight up. When you reach the "clear text"-row at the very top, you will find the clear text symbol. Example: The key is D, the ciphersymbol is K. Then the clear text-symbol is H.

Recodes binary input to our alphabet and outputs the ASCII.