DISCLAIMER: This article is 100% random and mostly just is about trying to figure out how the quantum computers will work, if they work. By using publicly available sources and a book i found in my campus book shop, it seems to be possible.

[edit] Papers and other sources

This science is in its cradle: Just like programming ordinary computers once upon a time required a PhD in electronics, so does programming quantum computers today require a PhD in quantum physics. There are almost no papers written that does not assume that the reader is really good at math and physics.

I want to change that.

I think it is possible to demystify quantum computing in order to make it possible for ordinary humans (like myself) to program them. This is pretty much what this article is all about :)

If you want to learn quantum physics, you should not continue reading. This article is only about how to program quantum computers.

QCL can emulate small quantum computers. The emulator can break the laws of physics since it is just a representation of a quantum computer. Therefore it is possible to peek at qubits without destroying their superpositions, something which is not possible in the real world. Emulation also means that it takes a lot longer to finish large computations than it would if we actually had access to a real quantum computer, but if we limit the emulator to using just a few qubits, we will not notice the lag. (Do not try to run shor's algorithm on numbers larger than ~250.)

There is also a quantum-dialect of brainfuck :D

It is difficult to describe any of the concepts without referring to any of the other concepts. This means that you might need to re-read some parts twice.

First, we examine real world probability. Then we go from there in order to describe quantum probability :)

If we flip a coin, the probability that it results in a head is 0.5. We write this as

If we are throwing two coins at the same moment, the probability that their positions ends up as tail-tail is P(tail)*P(tail) = 0.25.

If we flip two coins at the same time, we can not make them affect each others results. Their results are always independent of each others (unless we cheat).

If we have a quantum-coin (a qubit) we end up with this equation (compare with the above one!):

We can flip two quantum-coins and have them affect each others results. (This is called entanglement, and it is how we cheat.)

The four different positions we can end up with is

If P(head) > P(tail), this means that there is a much higher probability that A (that is, head-head) becomes the result, because the probabilities are squared.

Since the probability of each single outcome is squared, it means that a single outcome can be made to have a much higher possibility of ending up as the answer than any other possibility. It is possible to use this property to find solutions to problems that are difficult to find via other means. Programs for quantum computers will use this to "guide" the computer towards the correct solution.

Notice that it is not possible to completely remove the possibility of the other, erroneous solutions. This means that quantum computers can never come up with the correct answer with a 100% probability. This is not a problem, we will just re-run the quantum program until we know we found the answer.

Bits can be in either two states: Zero or One.

Entanglement is when more than one qubit is in the same superposition. They are "glued together", or entangled. Two qubits can be said to make up a 2-bit quantum processor register if they are entangled with each other.

Qubits that are entangled with each others does not have to be in physical proximity of each others.

A single qubit can only return the answer yes or no, after it has been measured, and has little benefit over a traditional one-bit electronic computer. If thirty qubits are entangled with each other however, they can be made to appear as if they are making 2^30 = 1073741824 computations at the same time. (A single qubit may only collapse into two states: one or zero. 30 entangled qubits may collapse into any of about roughly one billion different states.)

When qubits are entangled in the same superposition, it basically just means that we do not yet know what state the qubits are in. For example, two qubits could together be in 00 or 11 (the bell state). If one then measures only the first of the twoqubits, a measurement on the second qubit will result in the same value as the first. (We have two qubits: xx, and then measures the first so that we have 1x. Then, because we know the two qubits are entangled in the same superposition and the only alternatives for their combined value is either 00 or 11, then we know that the 2nd qubit will also be a 1.)

Decoherence is that a variable in a superposition is given a value. (This is what happens to Schrödingers Cat when we open the box to check if its alive or not.)

When the state of a qubit is measured, decoherence occurs. The qubit is given a value.

Before decoherence occurs, the values of qubits can only be described using quantum probabilities.

Controlled decoherence occurs after we are done with the computations, at the same instant we measure the result.

[edit] How to make computations

This means that we need to use an ordinary computer to check if the answer the quantum computer gave us is indeed correct. (Or, if that is impossible due to the nature of the problem, run the same quantum program over and over again to collect statistics, and then make a qualified guess.) 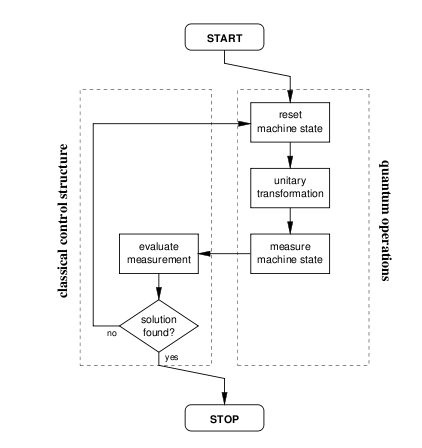 In the picture above

[edit] Stuff worth to know

More that is nice to know more about: Bell state, superdense coding, quantum teleportation. (use wikipedia, or contribute to this article if you know.)

an n-qubit register can be described as either

The base vectors represent the binary numbers that the register can assume at the instant of measurement (decoherence). There are 2^n dimensions because there are 2^n different probability that a register collapses to each one of the base vectors. The probability is related to the absolute value of "how deep within that dimension the vector is." (its amplitude in that dimension.)

The absolute value is the aplitude, the probability that the register will collapse to a certain value when measured (the vector aligns itself with one of its 2^n base vectors.)

A vector always have the length one, since the total sum of all probabilities (its sum of its depths in each one of its dimensions) can never become anything but 100%.

Input data is delivered as vectors aligned to one of their base vectors. AKA, bitstrings. Then the QC multiplies the vectors with a series of unitary matrices (which can be thought of as rotating the vectors, or as performing transforms on the series of complex numbers that describes the measurement probabilities.) A program is defined as a sequence of unitary matrices ("gates", just like classical computers. same same, but different..). When the program has come to its end, the QC measures the register, decoherence occurs, the register aligns with one of its base vectors and becomes a bitstring. This bitstring is then fed into the classical computer.

...i has no idea how to make useful computations within this framework. i has to study moar :)

This contain errors. Please correct them yourself.

All operations in a quantum computer consists of applying unitary matrices to the quantum-registers. Each quantum register contains an array of "probability vectors" (the superpositions are represented that way). When we apply the matrices, the probability vectors change.

Quantum computation is a bit like manipulating the cube in hellraiser. Every operation is a unitary matrix that, when applied, "rotates" (changes) the "object" (probability vectors) slightly.

Also, most of the time we do not have to care about the matrices. Many of the important ones are pre-programmed.

Get QCL up and running!

Allocate 5 qubits from the quantum heap...

What happened? The Hadamard function, named Mix() here, puts the qubits in a superposition. There is nothing special with Hadamards function, a lot of functions does this. Hadamard probably is the cleanest method to reach a superposition though. After the Mix(a) is executed, the number of qubits allocated (2 out of 5) is displayed, along with he probability of any given outcome. 0.5 actually means 0.25, but the square is not calculated (this is because the probability could be negative, and when a negative number is squared it becomes positive. We do not wish to lose that information.)

If one dumps the register (not possible outside the simulator - it would break the superposition if you looked at it) it says that there is a 0.25 chance of any of the four outcomes. Two qubits can collapse into any of 00, 01, 10 and 11. For example, "0.25 |3>" means that there is a 0.25 chance that 11 is the answer, if we would let the superposition collapse at this moment.

Continuing the QCL session from above..

When we measure the quantum register a, we have controlled decoherence, and the register obtains a single value. In this case, binary 11, or decimal 3. The answer could just as well have been 2, 1 or 0.

This IBM tutorial contains an example of some über-awesome parallelism that shows the power of quantum computing :) To be honest, i just read it and..