pf, short for packet filter, is the default firewall for the OpenBSD operating system.

If you want to know how pf works, you can go to The OpenBSD pf tutorial. This page sometimes assumes that you have read the default manual.

This is for OpenBSD 4.5 or something, which was more than two years ago. Pf has changed since then and so should this article..

Because you do not trust your linux iptables-firewall. It is very difficult to set up rules for scrubbing incoming packets from weird stuff, but pf does this nicely :) Maybe think about using OpenBSD for your routers, and linux only for the servers? That way the routers can filter all incoming packets and handle VPN stuff, BGP/OSPF/RIP/whatever-routing, while you still can use linux larger flora of free software. OpenBSD is generally more difficult to use for servers and stuff, but they are better on networking than linux. Take the best from both worlds :)? You can also use FreeBSD. Or just ignore this text. It is up to you :D *omg freedom of choice!*

[edit] What you need to think of

(This script is old, the language used for defining pf rules has been updated slightly. You can still modify this script easily though, if you want. But maybe read the official openbsd pf tutorial instead, its really good!)

This script is for a computer that sits in a firewall cluster. There are mainly three important interfaces: $intertubes, which connects to the internets. $LAN that connects to the LAN, obviously. And, finally, $syncro that is a special cable that runs to the other firewalls in the cluster. $syncro is used to keep track of all connections that flows through the cluster, so that if one firewall goes offline the others can resume operations without you going offline. It is nice if you want to stay online even if you reboot and maintains your firewalls. The $syncro interface could be connected to a switch if there are more than two computers in the cluster, or directly to the other firewall if there is only two of them.

DO NOT DEFINE $syncro AS EQUAL TO $LAN, it would seriously damage your security if there is angry-evil ppl in your LAN that knows how to capture packets off the wires. $syncro should be a separate cable, for physical security.

For this to work, you need to set up an pfsync interface, and a ftp_proxy. See the OpenBSD pf FAQ for more information about that.

Think of this script as a helping hand if you are trying to debug anything, rather than a definitive guide. It is NOT a replacement for the pf manual.

Stuff you need to think about 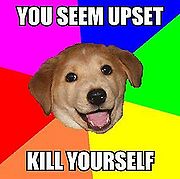 These are some IP-blocks i harvested from creeper.se. They contains swedish government organizations, and just plain evil companies, that are not allowed into any of my networks. Put them in a file (with the same syntax as below) and update your pf.conf to contain them in a table, that you block.

EDIT: This should really be a link to the Blocklists page.